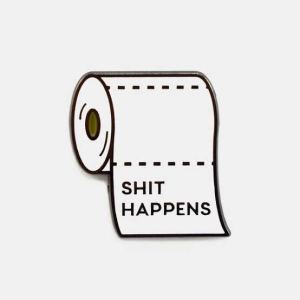 I’ll begin my attempting to define SHIT. It could be –

Every person is battling some shit.

Some people help others battle their shit but ultimately, we’re all responsible for our own shit.

I once worked in a job/profession as an External Consultant/Accountant and cleaned up other people’s shit, financial shit. Some of them were really literally swimming in and believing in their shit. Amazing honest-to-god shit!

There are many professions that have been created to help people get out of shit. And yes, we’ve heard that Shit HAPPENS…& you’ve got to learn from it.

A lot of bosses are.
Are you one of them?

I also cleaned toilets 🚽 twice a day every day for 7 years when I owned and managed my family gym literally cleaning 🧻 up members’ shit.(there is always a shit/boring part/element of every job that no one likes to talk about.

Action speaks louder than words, they say and my staff saw that I did what they did, too … that I also did what I wanted them to do. Because it was aligned with my business vision and my values and principles.

There’s not many CEOs/OWNERS of businesses that literally cleaned shit just as their staff did like I did. These are businesses where shit trickles down to the employees and there’s nothing they can do about it.

Shit comes in many forms, yes

You know the type… the kinds that just simply

Now, these types, my fiends, can be found everywhere these days and come in many forms, usually in the form of “opinions”

Not facts (based on sufficient & appropriate evidence) but simply … their opinion, just like their opinion of the best colour is blue and not red or green.

That kind of shit.

Generally referred to as BULL-SHIT (B-S)

Apparently, This is the worst kind of shit of all… from the mouths 👄 of people that roll out B-S.

It can come at you, anywhere and anytime but you have to be aware & prepared.

An ex work colleague told me once –

“Yes, and a lot of other things are strong too …. I smell B-S a mile away”

How is your BS detector like, given the extent of BS and superficial stuff that has been prominent in today’s modern societies, we’re all experiencing it almost every day? There is so much BS every where you turn. How do people filter out the essence from all the BS? Like I’ve said in the past, you need to be a better manager of your funnel, your filter.

Anyways, take good care of your own shit as best you can and remember, you’re not alone… ask for help if you need help with your shit.

I know, sometimes it can be very difficult to ask for help with shit but one of the courageous thing to do is to seek help with your shit when your shit is too much to bare/carry or if bearing it is unsafe because you’re UN-fit.

We all have our own cross (battles/shit) to carry just like Jesus had to bare (literally) his own cross (as our parish priest shared in his lovely sermon last Sunday), what I sometimes refer to as “Holy Shit”

God is you and God is in every living thing around you. God is omnipresent, God is everywhere in this frame we call “Life” in this infinite universe & also in our every-day.

Be healthy. Be safe. Be Aware. Be Action-oriented. Adapt.

that is it … another poem for you

note: I’m going to get into deep shit/trouble for saying the vulgar word “shit” repeatedly above