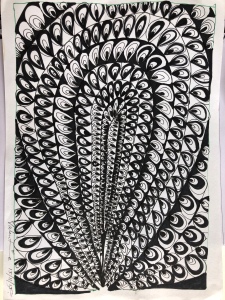 Maybe life is just a sequence of layers of energy that reveals itself to us based on the level of consciousness we attain. Just like the many layers you see here in my line-art.

What is consciousness? How do you define it? Many have tried. Many have failed.

What is death? What happens when you die? Is reality, death? Is death more Real than reality as we know it? There are a lot of questions but not as many answers to consciousness and death.

Yes, we are accelerating our knowledge on the brain but we are furthering our understanding on the “soft” or “easy” problems. What are these easy problems, well, according to the Australian philosopher, David Chalmers, they refer to those that we, in principle, know how to solve, even if we have not yet done so.

They include perception, learning, attention and memory; how we discriminate objects or react to stimuli; how being asleep differs from being awake. All these are easy, he says, compared with the really hard problems of experience itself. 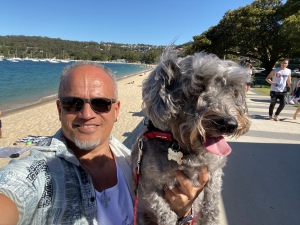 do you have more consciusness than a dog?

Not everyone agrees with the Australian.

Some claim that the hard problem does not exist, that it depends on a false conception of consciousness, or on drastically underestimating the ‘easy’ problems. The American Philosopher, Patricia Church-land, for example, calls it a “hornswoggle problem” argueing that we cannot, in advance, decide which problems will turn out to be the really hard ones.

The brain will always search for meaning … 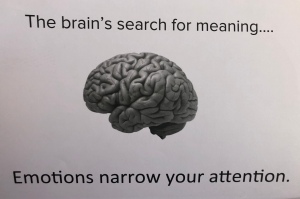 Feel your emotions.
Think through and with your heart.
Listen to your íntuition
We are not ‘thinking creatures who feel’ … but instead we are ‘Feeling creatures that think”.
We need to always remind ourselves of this.

This has baffled many philosophers and scientists and thinkers since the beginning of time. So, what is it?

Consciousness simply implies awareness: subjective experience of internal and external phenomenal worlds and it gives an independent view on reality, of the universe and of ourselves.

Some believe we will never know what consciousness is. The American Philosopher, Colin McGinn says that we humans are ‘cognitively closed’ with respect to consciousness. That is, we have no hope of understanding it, just as a dog has no hope of being able to read the newspaper he so happily carries back from the shop.

Even the famed psychologist Stephen Pinker agrees: we may be able to understand most of the detail of how the mind works, yet consciousness itself may remain forever beyond our reach. 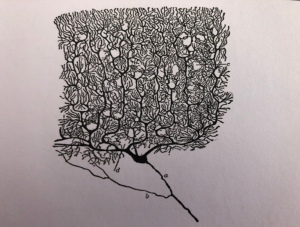 Communication in life is like a neuron connectome.
A neuron example and its network of dentrites
One of the 100 billions neurons in your brain that make you …
who you are.
Your are your connectome

“I think, therefore I Am”

Descartes says – “I think, therefore I AM”

This implies that consciousness is only aware of itself when it assumes form. “I AM” is a statement of awareness, confessing that the capacity for experience is independent of form.

But is this so?

Those that were ‘enlightened’ throughout history have disagreed with the thinker, Descartes, stating that consciousness is beyond form and is, indeed, the very omnipotent Matrix out of which form arises. Modern Physicists (like Bohm) agrees saying, to the effect that without consciousness there would be nothing to experience “form” and could further imply that form itself, as a product of perception with no independent existence, is thus transitory and limited.

Consciousness on the other hand is ALL – Encompassing and Un-limited!

So, if form (our body) is transitory, what is death? What and where do we go in the 4th dimension? Some call it heaven. Is death our partnership with infinity? Do we (our spirit/soul/consciousness) connect with and live forever. 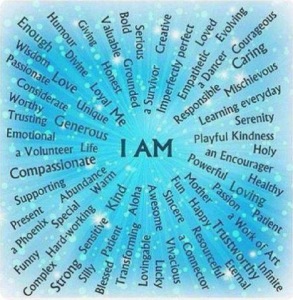 Part of the answer of what consciousness is, is aligned with our concept of self. The more limited the sense of self, the smaller the parameter of experiences is. For example, a dog or a bat “experiences” less than us and so has lower levels of consciousness.

It is one of the few real mysteries of life: –

What is the nature of consciousness and it’s occurrence in the brain and it’s ultimate place in the universe are UN-KNOWN!

So, if science cannot answer it, where should we turn for answers? 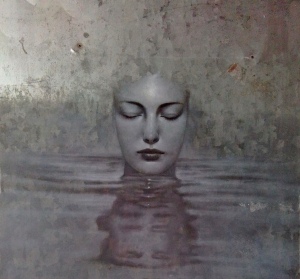 Stop. Take stock. Be like water. Adapt to the different states of life … and mind.

Death could be permanent, could be our chance to live forever

Have you ever had a near death experience or an ‘out-of-world’ experience?

That day change my life forever or rather, my perception of life changed dramatically.

So much of life is stress, lots of worry … hard work and a lot of hurt and tears.

If we are going to die, then why do we strive so hard to be busy … and continue to be busy JUST to stay alive.

Why not JUST die?

Why do we fear death? 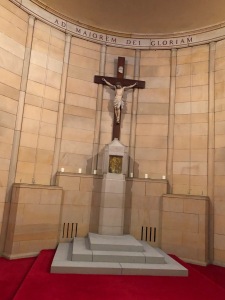 Was crucifying Jesus Christ ‘Justice’ at that time?
Is the answer to death and consciousness with Jesus? Does it with God?

Maybe our relationship with God has the answer

One does not have to look very far to feel the pain and despair of death. I have experienced my fair share over the years, losing both my grandparents in my teens and my mum when she was only 54 years old. I’m sure you’ve felt that despair and pain too.

The life and death of each of us has influence on others. “If we live, we live to the Lord; and if we die, we die to the Lord. So, whether we live or die, we belong to the Lord.” (Romans 14:8)

Jesus didn’t say much about what happened to people after they died, but he promised everlasting life to all who believed in him (which is similar to what I said in the previous sub-topic. It is interesting though, that Paul saw death as “The Enemy”, but an enemy defeated by Christ … through his resurrection.

“Father, my death and the deaths of people I love are indeed a mystery. Although I may not give up searching our the mystery, I do not want to torture myself to know the unknowable. You have penetrated and conquered it. My hope is in you; I need no more. Your saving grace is enough. “

Thank you, through Christ my Lord, 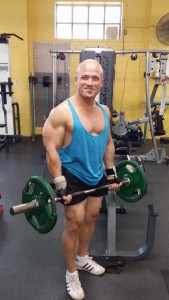 Learn more about YOU. The knowable. Don’t chase the unchaseable.