Every now and then, I get a part of my body that just has an irritating itch. Yes – itch!

Have you ever felt an itch? Well, just yesterday the skin around the top part of the knuckle of my left toe started to itch just before dinner. When I felt that first tingling sensation, I thought, “oh no, please don’t star!” I’ve had many over the years and I have always thought of these itches like never-ending tickles.

Now, I am going to share this itch story with you because I think experiencing an itch explains certain elements of life. How, sometimes (and we all know people like this – people that turn an ant hill in to a mountain!). How something that is triggered by a small event and instantly takes you to another part of the world.

You see, that little scratch is now a day old sore. Yep, a sore that has a scab on it. Don’t you think it’s quite irritating? I mean, if you’ve ever had one – an itch, that is (and you probably have at one point in your life so far), it is a cycle of pain. I mean, that small itch gets scratched, and this makes it more itchy, which then forces you to scratch even more and more until you’re literally in pain and you can’t take it anymore.

A never-ending cycle, how awful is that!

Something so small, but causes so much havoc!

Progress shots of the ‘back double biceps’ pose prior to contest. Most think body-building is an individual sport. I don’t agree. It is a team sport : all the muscles have to work together, to flow ‘as one’ towards balance and symmetry.

I think this phenomenon somewhat explains how so much of so many people’s lives and actions are based on assertions that have a basis of fear. Assertions are beliefs that are postulated but have no hard facts to support it. There is no evidence and is similar to when people ‘blow things out of proportion’ when something goes wrong or they anticipate the worst-case scenario. We all know these kinds of people.

You may be one of them.

People that turn that little itch (slight error, hurdle, challenge in life) into something huge before it even happens. Created in their minds – in a world they invented for themselves. I think we may have all been guilty of this at one or more points in our lives, depending on the situation we had faced.

These base-less fears spin out of control like the little itch spins you out of control … in a cycle of pain. The itch is firstly a bother, the scratch feels good, and so you repeat this forever, until you are bleeding (happened to my toe).

Just like the itch, worrying about something that has not happened (anxiety) and probably will never happen does not serve you. 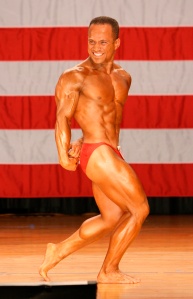 Side Triceps pose in the heat of competition at the 2007 World Natural Bodybuilding Contest held in NY, USA.
Represented Australia.
Ranked: 4th Best Natural Bodybuilder in the World.
Repeated this in 2008.

Sometimes, the best thing to do is to just LEAVE IT ALONE!

Yes, just leave the itch alone. Don’t scratch it. Don’t do anything to it. Now this is more difficult than it sounds. It goes against every fibre in your bone to just let an itch be. To sit and not scratch. To sit and just experience the discomfort, the pain. Teach yourself to BE COMFORTABLE BEING UNCOMFORTABLE. This is something I have always believed in and I remind my students of this in the gym when I tell them that a little bit of discomfort is a GOOD THING.

So, whether it be a physical itch on your body or you stressing yourself and experiencing fear of an event that has not occurred yet (suffering from anxiety). Sometimes the best thing to do is like that Beatles song goes … just “LET IT BE” .

And when is the best time to stop this cycle of pain?

Right at the beginning. Choose not to scratch. Choose not to get assurance about your anxiety. Accept it. Experience it. Enjoy it (in a strange way).

Slow the urge to scratch the itch. Quiet the mind. Just LET IT BE.

The itch will stop itching. What you had anxiety over will highly likely not happen. Your assertion will remain just that: an assertion. Not based on facts.

So, don’t scratch your itch. Arm yourself with the thought that the itch has a finite life, that it will eventually come to an end and the pain will be no more. But you will wake up tomorrow and … Life will go on.

A former student of mine. Mother of two young children with a dream to BE HER BEST. To find the CHAMPION LYING DORMANT WITHIN HER.
After 8 years of total devotion to motherhood, I helped her, help herself realize her dream in less than 10 months.
She placed 2nd in NSW in Figure in a very tough line up.
A great student who believed. Believed in herself. Believed in my program. Believed in her dream.
Well done champ!